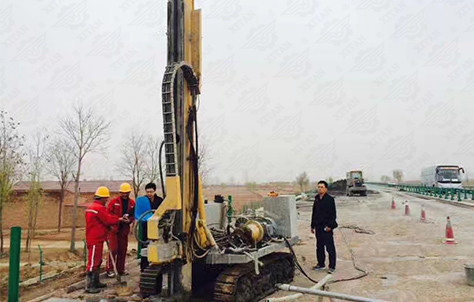 The development of the jet grout method in the 1970s

The use of CCP (proposed by Konoike Co., Ltd.) was one of the five solutions deemed worthy of mention during the international competition on the methods for the stabilization of the Pisa Tower in the early 1970s, bringing it to the attention of European businesses in general and Italian businesses in particular. The Nissan Freeze Company, the owner of the CCP technique patent, and several Italian businesses soon began to enter into commercial agreements, which sparked the spread of the technology throughout Europe.

The Column Jet Grout (CJG), also known as the "Kajima technique" after the Japanese business that created it, was the result of additional development. This procedure involved simultaneously lifting and rotating a rod with an upper nozzle for injecting water and compressed air and a lower nozzle for ejecting cement grout on the bottom.

The type and quantity of fluids injected into the ground is a key distinguishing characteristic of each jet grouting technology as a result of this historical evolution. According to the number of fluids injected into the subsoil, the techniques currently available can be divided into three primary systems, known as single, double, and triple fluid, notably grout (often a water-cement mixture), air and grout, and water plus air and grout.

The development of the jet grout method in the 1980s

Jet grouting was initially primarily thought of as a way to enhance the subsoil qualities for the foundations of huge projects. Jet grouting rose to prominence in the 1980s in Germany (Bell 1983; Berg and Samol 1986), the UK, and Italy (Garassino 1983; Aschieri et al. 1983; Balossi Restelli and Profeta 1985; Tornaghi and Perelli Cippo 1985). (Coomber and Wright 1984; Coomber 1985a,b). It was then widely regarded as a trustworthy geotechnical tool in Europe, and its uses were expanded to include foundations, excavations, tunneling, flood barriers, and underpinning.

Early in the 1980s, jet grouting was introduced to the US market (e.g., Langbehn 1986), but it got off to a "sluggish start" (Tarricone 1994), mostly because of perceived legal dangers associated with the new technology (Xanthakos et al. 1994). After some time, though, the technology became well-liked in the United States and later in Canada because it offered workable and affordable solutions to a variety of challenging situations, such as excavation support, ground-water barrier, bottom sealing to keep pollutants out of excavations, protection for bridges against scour, stabilization of slopes, and underpinning of current foundations in commercial and industrial settings.

Jet grouting also gained popularity at the same time in most of South America, particularly in Brazil (Guatteri et al. 1988).  Currently, jet grouting is utilized all over the world (see, for instance, Ryjeski et al. 2009; Fang et al. 1994a).