THE ADVANTAGES OF JET GROUTING SYSTEMS 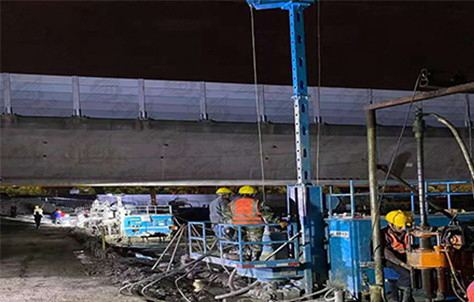 THE ADVANTAGES OF JET GROUTING SYSTEMS

These systems come in more varieties than there are actual systems, but they are typically "bottom-up" processes. To put it another way, they use hydraulic rotary drilling to get to the design depth, and then they start jet grouting processes to make a cementitious soil matrix that is known as soilcrete.

The drill annulus must be sufficiently large to allow for unhindered up-hole spoil return during grouting. This makes it possible to manage the on-site stress environment. In the absence of this spoil return, the ground will hydrofracture and become uncontrollable. Extreme discrepancies in the soilcrete's quality and shape may result from the loss of this control.

Which jet grouting technologies are suitable depends on parameters like soil type and stratigraphy. Practically speaking, no other grouting method can be as successful on a variety of soils as jet grouting. The problem can be effectively solved by a number of competing systems, which should be taken into account in terms of budget and timeline.

Pay attention to the soil's "erodibility" when assessing it... How easy is it susceptible to being destroyed by the hydraulic force of jet grouting?
Cohesionless soils degrade more quickly than others. The turbulence that is produced in the immediate area of the fluid injection is sufficient to disintegrate cohesionless soil types. In most stiff clays, erodibility declines as plasticity and stiffness rise, rendering jet grouting ineffective.

The stratification of the soil must also be taken into account because different soil conditions affect the characteristics and quality of the soilcrete. To achieve consistent geometry, the jet grouting parameters may also need to be adjusted in relation to depth, or one may choose to accept varying geometry and add more soilcrete.

Despite being regarded as cohesionless, gravels, cobbles, and boulders may be extremely difficult to erode or highly erodible depending on in situ density, soil matrix, and other factors. The jet stream will be obstructed by boulders, and beyond them will be a "shadow" of untreated dirt. Poor erosion can also be brought on by buried trees and soil that has been cemented.